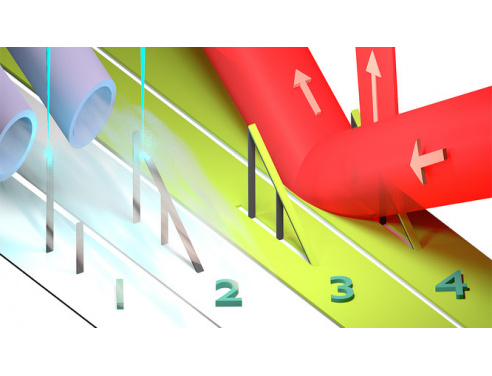 Three-Dimensional Nanomagnets for the computer of tomorrow

Fabrication process of the new 3D nanomagnets: Using a gas injector and an electron microscope a scaffold is 3D printed onto a Silicon substrate (steps 1 and 2). Magnetic material is deposited over the whole ensemble (green, step 3). Magnetic information is then read from the substrate and the nanostructure independently by using a laser (red, step 4). / Dédalo Sanz-Hernández

The information revolution that has shaped society into what it is today has been based on traditional printing of ever-shrinking electronic components. With current technologies reaching the limits of what Physics allows, researchers are starting to explore the third dimension in search for a route to continue improving those electronic devices in our pockets.

"We demonstrate a new way to fabricate and use a magnetic device which, in a nanometric scale, can controllably move information along the 3D of space"

In a recent study published in the journal ACS Nano, researchers at the university of Cambridge (UK) and TU Eindhoven (Netherlands), demonstrate how by combining the most advanced techniques in 3D-nanprinting with traditional methods it becomes possible to create functional circuits that can process information.

“We demonstrate a new way to fabricate and use a magnetic device which, in a nanometric scale, can controllably move information along the three dimensions of space”, highlights Amalio Fernández-Pacheco, principal investigator of the project at the Cavendish Laboratory in Cambridge. To create these nano-magnets in 3D an electron microscope is used along with a gas injector to 3D print a suspended scaffold on a traditional 2D Silicon substrate. After 3D nano-printing, magnetic material is deposited over the whole ensemble to allow information transport.

By combining a very precise fabrication protocol with an tailor-made laser system, the authors have been able to demonstrate the detection of structures which are almost completely suspended and have widths of only 300 nanometers. Amalio Fernández-Pacheco, Principal Investigator of the project (left) and Dédalo Sanz- Hernández, lead autor of the work (right) posing with the optical system used at the University of Cambridge to read information from 3D magnetic nanostructures. / Dédalo Sanz-Hernández

“In this work not only we demonstrate a big leap in nanofabrication capacities, but also, importantly, we have developed a system which allows us to look at these tiny devices in a relatively simple way”, remarks Dédalo Sanz-Hernández, leader of this work.

“The information within the device can be read using a single laser in dark-field configuration (a technique designed to isolate small objects from bright backgrounds)”, he explains.

A breakthrough in spintronics

This breakthrough is part of the broader field of what is known as ´spintronics´. Spintronic technologies not only exploit the electrical charge electrons to store and process information, but also their spin, allowing the development of electronic circuits that benefit from greater energy efficiency than current technologies.

“Projects such as this one open the path to the development of a completely new generation of magnetic devices that can store move and process information in a very efficient way by exploiting the three dimensions of space”, remarks Fernández-Pacheco.