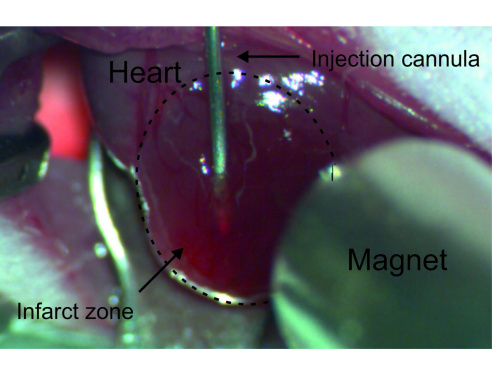 How can damaged cardiac tissue following a heart attack best be treated with replacement muscle cells? A research team under the supervision of the University of Bonn is now presenting an innovative method on mice: Muscle replacement cells, which are to take over the function of the damaged tissue, are loaded with magnetic nanoparticles. These nanoparticle-loaded cells are then injected into the damaged heart muscle and held in place by a magnet, causing the cells to engraft better onto the existing tissue. Using the animal model, the scientists show that this leads to a significant improvement in heart function. The specialist journal Biomaterials presents the results in advance online, the print version will be published in the near future.

In a heart attack, clots usually lead to persistent circulatory problems in parts of the heart muscle, which then cause heart muscle cells to die. Attempts have been made for some time to revitalize the damaged heart tissue with replacement cells. "However, most of the cells are pushed out of the puncture channel during the injection due to the pumping action of the beating heart", explains Prof. Dr. Wilhelm Röll from the Department of Cardiac Surgery at University Hospital Bonn. Therefore, only a few spare cells remain in the heart muscle, which means that repair is limited.

With an interdisciplinary team, Prof. Röll tested an innovative approach on how to ensure that the injected replacement cells remain in the desired location and engraft onto the heart tissue. The experiments were performed on mice that had previously suffered a heart attack. In order to be able to better follow the cardiac muscle replacement EGFP expressing cells obtained from fetal mouse hearts or mouse stem cells were employed. These fluorescent muscle cells were loaded with tiny magnetic nanoparticles and injected through a fine cannula into the damaged heart tissue of the mice.

In the magnetic field, the nanoparticle-loaded replacement cells remain in place

In some of the rodents treated this way, a magnet placed at a distance of a few millimeters from the surface of the heart ensured that a large part of the nanoparticle-loaded replacement cells remained at the desired location. "Without a magnet, about a quarter of the added cells remained in the heart tissue, with a magnet, about 60 percent of them stayed in place", reports Dr. Annika Ottersbach, who was a PhD student in Prof. Röll's team during the project. Ten minutes under the influence of the magnetic field were already sufficient to keep a significant proportion of nanoparticle-loaded muscle cells at the target site. Even days after the procedure, the injected cells remained in place and gradually attached themselves to the existing tissue.

"This is surprising, especially since the infarct tissue is relatively undersupplied due to poor perfusion", says Prof. Röll. Under the influence of the magnet, the replacement muscle cells did not die as frequently, engrafted better and multiplied more. The researchers investigated the reasons for the improved growth: It was found that these implanted heart muscle cells were packed more densely and could survive better thanks to the more intensive cell-cell interaction. Moreover, the gene activity of many survival functions, such as for cellular respiration, was higher than without a magnet in these replacement cells.

The researchers also demonstrated that cardiac function significantly improved in mice that were treated with nanoparticle muscle cells in combination with a magnet. "After two weeks, seven times as many replacement muscle cells survived, and after two months, four times as many compared to conventional implantation technology", reports Prof. Röll. Given the lifespan of mice of a maximum of two years, this is a surprisingly lasting effect.

In the research group 917 "Nanoparticle-based targeting of gene and cell-based therapies" funded by the Deutsche Forschungsgemeinschaft (German Research Foundation), a wide range of disciplines worked together, ranging from medicine, physics and engineering to biology. "This interdisciplinary approach facilitated the unusually broad spectrum and depth of the investigations", says Prof. Röll. The scientists are convinced that this technology can potentially also be transferred to humans. Prof. Röll: "However, there is still a long way to go, and intensive further research is required before this method can be used in a clinical setting."