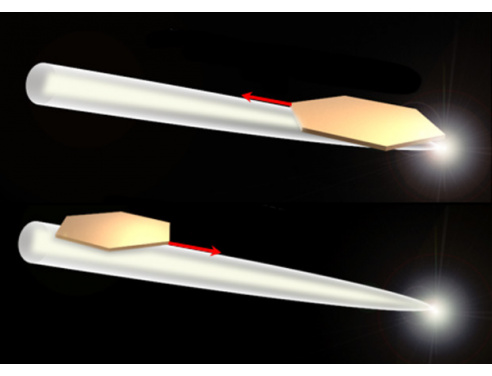 Two forces coming from a light beam—one based on momentum transfer, the other on thermal effects—drive a tiny gold plate to move in opposite directions.

Light board. A tiny gold plate on a tapered optical fiber experiences two significant forces. The thermal-based photophoretic force dominates near the fiber tip; this force pulls the plate away from the tip and up the fiber. The direct optical force ... Show more

Light carries momentum that can push on an object, but it can also move an object through thermal forces. A new experiment combines both of these effects to manipulate a tiny gold plate that can slide along a tapered optical fiber. The momentum-transfer and thermal forces act in opposite directions, allowing the plate to be driven first one way and then the other. The device might one day be used to generate mechanical energy from light or as a micro-transport system for a miniature chemical processing device called a lab-on-a-chip.

When a light beam reflects or scatters off an object, the object will recoil. This so-called optical force is used, for example, to trap glass beads in optical tweezers. Light can also exert force through the photophoretic effect, where preferential absorption of light on one side of an object leads to a temperature difference that causes the object to move. The air molecules on the hot side heat up, and their collisions with the object deliver more momentum than those on the colder side, producing motion, as in the rotation of a radiometer (light mill).

In most situations, both the optical and photophoretic forces will act on an object exposed to light, but usually one will dominate, says Min Qiu of Zhejiang University in Hangzhou, China. For example, in water, the optical force dominates because the liquid prevents any significant heat buildup in one location. Researchers have devised experiments in which an object is affected by both forces, but typically the force directions are the same or the motion is limited (see 9 July 2012 Viewpoint). Qiu and his colleagues’ new setup has the two forces driving an object back and forth over relatively long distances.

The team performed experiments in air with an optical fiber that narrows down to a point, like a needle. When light is channeled through this tapered fiber, the amount that leaks out (the evanescent field) increases as you approach the tip. This escaping light generates the optical and photophoretic forces. As their light-interacting object, the team chose a hexagonally-shaped gold plate that was 10 micrometers across and 30 nanometers thick. The team tilted their fiber down at a slight angle of 9° and placed the plate on top of the fiber, near the end. The plate experienced a mild, attractive (van der Waals) force that prevented it from falling off the fiber.

In multiple trials, the team sent a broad-spectrum light beam into the fiber and observed the plate sliding up the fiber, about 20 micrometers or so. From there, the plate slid back down to its starting point and then reversed course one more time, sliding up about 40 micrometers and stopping for good. This entire yo-yo motion took a little less than 3 seconds (see video).

The team explained the plate motion with detailed calculations. They showed that the light escaping the fiber heats the front end of the plate (the one closer to the fiber tip) more than the back end. Air molecules striking the plate obliquely deliver more momentum when coming from the hotter front end, as opposed to the colder back end. As a result, the photophoretic force pulls the plate up the fiber, away from the tip.

For the optical force, the gold plate scatters and absorbs light propagating toward the tip, pushing the plate tip-ward. The team’s calculations showed that—at the fiber tip—this force is much weaker than the photophoretic force, which explains why the plate initially moved away from the tip. However, at a distance of about 10 micrometers up from the tip, the optical force begins to dominate, pushing the plate back toward the tip. This back-and-forth motion is cut short when the plate slides too high up on the fiber, where the optical force is too weak to overcome static friction, Qiu explains.

Potentially, one could optimize the system so that the oscillations continue indefinitely, says Qiu. The team is currently exploring whether using a narrow-band light beam could help in this regard. If successful, the device might serve as a light-driven motor. Another possibility is to use the gold plate as a shuttle to carry small quantities of a drug or other chemical reagent from one reaction chamber to another within a lab-on-a-chip.

Cheng-Wei Qiu (no relation) of the National University of Singapore, an expert in light-force manipulation, says previous efforts have demonstrated light-induced back-and-forth motion, but this new work is unique. “It is basically exploiting the competition of photophoretic force and optical force to deliver a ‘skateboard’ or ‘hovercraft’ on a track.”