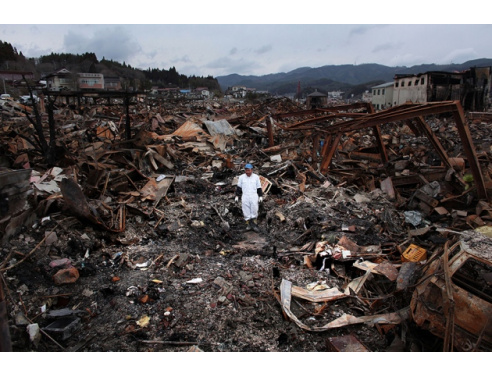 Gravity signals could speedily warn of big quakes and save lives

Gravity signals that race through the ground at the speed of light could help seismologists get a better handle on the size of large, devastating quakes soon after they hit, a study suggests. The tiny changes in Earth's gravitational field, created when the ground shifts, arrive at seismic-monitoring stations well before seismic waves.

“The good thing we can do with these signals is have quick information on the magnitude of the quake,” says Martin Vallée, a seismologist at the Paris Institute of Earth Physics.

Seismometers in China and South Korea picked up gravity signals immediately after the magnitude-9.1 Tohoku earthquake that devastated parts of Japan in 2011, Vallée and his colleagues report in Science on 1 December1. The signals appear as tiny accelerations on seismic-recording equipment, more than a minute before the seismic waves show up.

“We can look before the seismic waves arrive,” says Vallée. “If we see nothing, we can say that the quake that made these was maybe large, but not huge. If we see the signals, it means we really have a very big quake.”

Had seismologists been monitoring for gravity changes, they might have realized sooner just how big the Tohoku earthquake was. It took the US Geological Survey (USGS) 40 minutes to update its initial estimate of magnitude 7.9 to 8.8, much closer to the quake’s true size, and 3 hours for the Japan Meteorological Agency to do the same. A small increase in an earthquake’s magnitude means a large change in the energy released by the quake — and the devastation expected. That information is crucial for emergency responders as they decide what resources to deploy.

“It’ll be a major contribution if gravitational waves can beat down the time needed to know that a big earthquake is big,” says Susan Hough, a USGS seismologist in Pasadena, California.

But much work remains before gravity signals can be considered a reliable tool in the crucial minutes after a big quake, says Gavin Hayes, a USGS seismologist in Golden, Colorado. “I don’t see it being a game changer,” he says.

The latest work arose when a group of European and US researchers began exploring how vibrations from small earthquakes affect gravitational-wave detectors such as the European Virgo and the US Laser Interferometer Gravitational-Wave Observatory (LIGO). Many of the scientists also worked on earthquake early-warning systems, and they began to think about whether earthquakes created gravitational perturbations and how those might be detected2.

The challenge is in picking up the gravitational shaking, which is much weaker than that from seismic waves. In 2016, the scientists published3 a proof-of-concept study showing that a gravity-measuring instrument in Japan’s underground Kamioka Observatory had detected signals from the 2011 quake, which happened about 500 kilometres away. But others questioned how strong and reliable the signals might be4.

In the latest paper, Vallée and his colleagues report many more observations of gravity signals immediately after the Tohoku quake. The signal was most apparent at monitoring stations between about 1,000 and 2,000 kilometres from the quake’s epicentre. At that distance, the fast-as-light signals had enough time to arrive and be clearly recorded before the seismic waves swamped them.

Modelling suggests that the method should work for gauging quakes of magnitude 8.5 or greater, which are large enough to generate detectable gravity signals. The team is now hunting for signals that might have been recorded after other great quakes, including the magnitude-9.1 event in Sumatra in 2004 and the magnitude-8.8 one in Chile in 2010.

A few extra minutes of warning can save lives, particularly in coastal areas where people can evacuate ahead of an incoming tsunami, says Jean-Paul Ampuero, a seismologist at the California Institute of Technology in Pasadena. “That’s low-hanging fruit.”