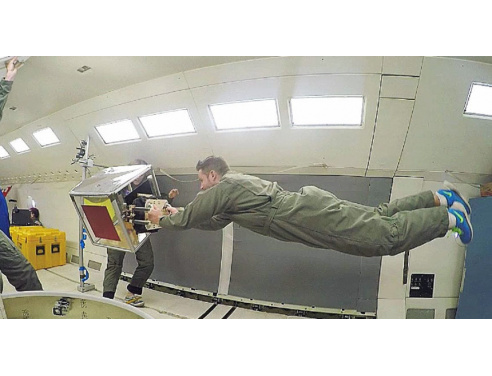 Get a grip. A new robotic gripping tool based on gecko feet can grab hold of floating objects in microgravity. The grippers could one day help robots move dangerous space junk to safer orbits or climb around the outside of space stations.

Most strategies for sticking don’t work in space. Chemical adhesives can’t withstand the wide range of temperatures, and suction doesn’t work in a vacuum.

Adhesives inspired by gecko feet — which use van der Waals forces to cling without feeling sticky (SN Online: 11/18/14) — could fit the bill, says Mark Cutkosky of Stanford University, whose team has been designing such stickers for more than a decade. Now his team has built robotic gripper “hands” that can grapple objects many times their size without pushing them away, the researchers report June 28 in Science Robotics.

The team first tested the grippers in the Robo-Dome, a giant air hockey table at NASA’s Jet Propulsion Laboratory in Pasadena, Calif., where two 370-kilogram robots gently pushed each other around using a small square of gecko gripper.

Then last summer, Aaron Parness and Christine Fuller, of the Jet Propulsion Lab, and Hao Jiang of Stanford took the full gripper hand, which includes several patches of gripping material in a specific arrangement, on a microgravity flight in NASA’s Weightless Wonder aircraft. The team used the hand to grab and release a cube, cylinder and beach ball, which represented satellites, spent rockets or fuel tanks, and pressure vessels.