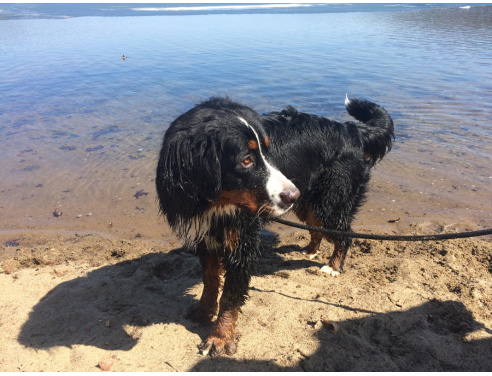 For the first time, animal behaviorists have investigated the mechanics of speech processing within the canine brain. A new study, published today in Science, found evidence to suggest that dogs respond to praise words in various ways, depending on how we say them. The team of Hungarian scientists believes the apparatus for parsing speech could have evolved much earlier than we thought, and may not be unique to humans.

The human brain is comprised of various systems that perform their own, individual functions. Contained within the left hemisphere, for example, is the Broca’s area. This part of the frontal lobe regulates certain aspects of complex language, such as grammar and motor speech control. The right hemisphere is associated with things like cognition, memory, and problem solving—tasks that aren’t directly related to language, but play an ancillary role in how we understand speech.

It’s worth noting that none of these rules are hard and fast. In humans, between 70 to 95 percent of us rely on our left hemispheres to regulate language. This means that some people’s speech centers are located in their right hemispheres, or might not be as lateral as we think. Our brains are also incredibly dynamic, and can even shift functions to new regions if a traumatic injury occurs.

“The human brain not only separately analyzes what we say and how we say it, but also integrates the two types of information, to arrive at a unified meaning,” Andics added. “Our findings suggest that dogs can also do all that, and they use very similar brain mechanisms.”

In order to see inside Fido’s brain, researchers trained 13 dogs to lie motionless inside of an fMRI brain scanner. This type of machine relies on magnetic resonance imagingto create high resolution scans of neural tissue. Doctors can use fMRI to see how the brain is activated by certain stimuli, and visualize how our minds work.

According to Márta Gácsi, an animal behaviorist who developed the research method, sitting in the fMRI machine was something the “dogs enjoy to take part of.” While inside, a trainer heaped praise on them, using both exuberant and neutral intonation. She also spoke conjunction words that were more or less meaningless to the dogs.

“We looked for brain regions that differentiated between meaningful and meaningless words, or between praising and non-praising intonations,” said the study’s co-author Anna Gábor, a PhD student at Eötvös Loránd University.

The scans revealed that different parts of the dogs’ brains were activated by various intonations. Meaningful words were processed in the left hemisphere, independent of the intonation used by trainer. But to interpret effects like tone and pitch, the dogs would rely on an auditory region in their brains’ right hemisphere. In a separate study, published two year ago to Current Biology, the same group of authors found evidence that dogs also use their right hemisphere to translate emotional sounds, such as crying or laughing.

Curiously, the dogs’ reward center, which is a part of the brain that processes pleasurable stimuli, was only activated when praise words were spoken with positive intonation.

“It shows that for dogs, a nice praise can very well work as a reward, but it works best if both words and intonation match. So dogs not only tell apart what we say and how we say it, but they can also combine the two, for a correct interpretation of what those words really meant,” said Andics.

Still, Fido is an imperfect subject, and there’s no way to know for sure how he feels about “good dog,” versus “good dog.” As Hungarian ethologist Ádám Miklósi once toldSlate, measuring the intelligence or cognition of animals is plagued with variables. It’s possible that things like environment, familiarity, or individual temperament, skewed the study’s results.

And as any dog owner will know, no two pooches are alike. My own responds exclusively to food, praise be damned. I’d be interested to read a study on that, but I already know what happened to Pavlov’s dog.