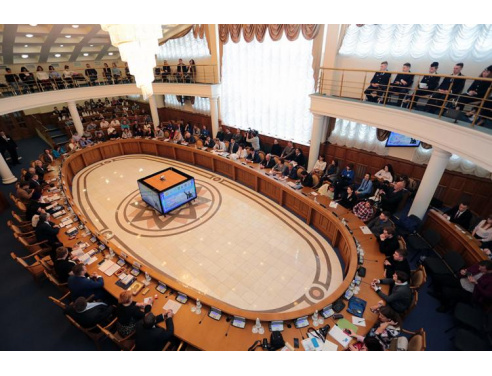 Forum was the centre  of attraction for lawyers, teachers, physiologists, sociologists, political scientists, and representatives of Clergy. Nearly 350 people from The  Russian Federation, Ukraine, Belorussia, Bulgaria, Serbia, Poland, The Luhansk People’s Republic, The Donetsk People’s Republic, Ecuador, and other countries decided to take part in the Forum. All in all, over 200 non-residents attended it to discuss all the actual problems.

All the members and guests of the Youth  Forum were given a welcoming speech by Svetlana Ostrikova, Vice- Rector for Cultural and Educational Affairs of Belgorod State University.

“ The world is facing a tendency of transforming jurisprudence into means of legalizing a moral disgrace”- speaking about an importance of the event, said Ms. Ostrikova.- “ The purpose of this Forum is to find out the ways of solving these problems”.

Abbot of the Cathedral of the Transfiguration of the Lord, Archpriest Oleg Kobets in his address to participants admitted the significance of all the issues, which would be presented for discussion.

“ Relevance of the agenda and the great importance of this scientific event have made this annual meeting of the Youth a tradition”,- said father Oleg Kobets. –“ Today’s Youth Forum is special because it is held in the period when our country celebrates Victory day .”

The Director of the Law Institute, professor Evgeny Tonkov told, that the tradition of the Youth Forum was originated in Belgorod State University. Annually, on the eve of this event  a competition of scientific works is held. This year, as Dr.Tonkov said, over 300 papers of students and master’s degree students of different Universities of Russia and foreign counties were presented to the jury. Some days before the main event winners were rewarded certificates.

In the frames of the Forum workshop sessions were held.

Professor of the Kuban State University, Andrey Ostapenko shared his ideas on the topic” Modern Youth and traditional values”. Professor of Moscow State University named after M.Lomonosov, Marat Musin told about the projects of a big war and total cleaning in the modern world. Professor of Belgorod National Research University, Elena Safronova presented a paper” A person and education in the conditions of global reconstruction”. There was also a semi-final of the II All-Russian Competition on spiritual and moral culture “ Russian Orthodox Church. XX century” held.