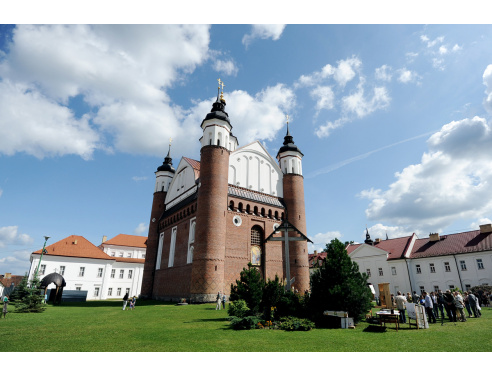 On the 29th of May, hosted by Suprasl Academy ( Poland), V International scientific-practical conference “ Orthodox Christian Scholar in the modern world” under the theme “ The problem of saving  spiritual and moral values in the secular world” was held. The conference ,honored the memory of Saint  archimandrite Grigol ( Peradze), well known as a scientist and a theologian of XX century,  who died in Auschwitz  concentration camp.

Before the beginning of the conference, members and participants of it came together for the Divine Liturgy at The Monastery of the Annunciation in Suprasl. After the church service the plenary session was opened with a welcoming speech of Bishop Gregory( Kharkevich) of Suprasl.

The first paper,  submitted for presentation to the plenary session was  “ The Holy  fire: myth and reality” given by the Chairman of the AOCS, Archpriest Gennady Zaridze. Doctor of History, Professor of University of Bialystok Antoni Mironowicz brought up a problem of national sovereignty in relation to European Union. PhD ( Politics), Associate professor of Maria Curie-Sklodowska University in Lublin, Alexey Kutsia made a report on the most relevant issue “ The resolution of the Holy and Great Council of the Orthodox Church in the light of ecclesiastical and theological criticism”. At the end of the plenary session Doctor of Law, Professor of Belgorod National Research University Elena Safronova took the floor for “ Transhumanism and modern education” and gave a very emotional and rousing  speech.

The conference continued after a short break with three workshop sessions, where questions, connected with the problems of pedagogical work and informational security  in the system of the higher school, were discussed. A particular interest was taken  to the paper of Master’s Degree student of law from Equador, Pablo An Pino “Slavery in the modern world”.

The closing session of V International Conference adopted a resolution with all the participants being invited to a literary- musical performance of Michail Yakovlev, who  played an acoustic guitar.

On the second day of the conference the participants made pilgrimages to the holy places of Bialystok.

“ Before our journey  to Poland, not all of us imagined that these  places are full of Orthodox Christian sanctuaries. So, all the members of our group were really surprised that there are 12 functioning churches in Bialystok , where thousands of Orthodox Christian Poles, Belorussians, Russians, Ukrainians worship. Grandeur and beauty of the holy places impressed us massively.”- said Associate Professor Natalia Zueva.

After visiting  Poland, participants made another pilgrimage to the sanctuaries of Belarus, to Minsk Theological Academy( Zyrovicy, Grodno region), where another part of the conference    “ Orthodox Christian Scholar in the modern world” was held.