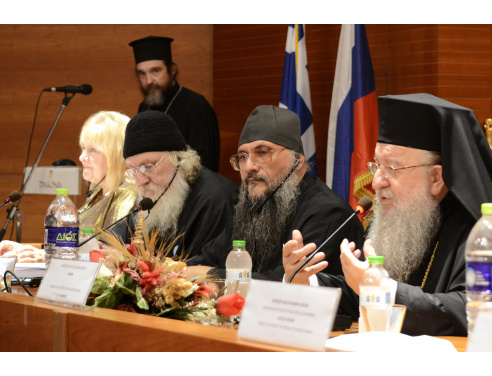 We, the participants of the Association of Christian Orthodox Scholars’ 4th International Conference, “The Orthodox Scholar in the Modern World”, representing various scientific disciplines and different countries (Russia, Greece, Belorussia, Macedonia, Poland, Serbia, Ukraine and Montenegro), hereby state that we are witnesses to a global spiritual revolution, which threatens to change the very essence of humanity.

In the ideological sphere, the world is experiencing a trend towards deliberate antitheism and consequent de-Christianisation. Occultism is making great inroads in the economic, financial, political, and executive spheres, and in those of education and culture. This is leading towards a fundamental change in the spiritual constitution of humanity.

In the scientific sphere, the growing trend is towards moral relativism, the dissimulation of gnostic antitheism under scientific rhetoric, and strategic levels of scientific and technical research tend towards a “trans-humanistic” character.

In the legal sphere, there is a growing trend towards the legitimisation of sin; the law is becoming a means of legalisation of vice, depriving humanity of the right of moral protest, as well as opportunities to critically assess the situation and to defend collective interests.

In the global economic sphere, we identify the phenomenon of virtualisation, and the existence of a high proportion of financial shares which are unsecured by real values. The Western countries’ aspiration for super-profit, and their popularisation of consumerism and socio-economic parasitism, constitutes a threat to the economic and political security of humanity.

In the cultural sphere, we observe vigorous popularisation of the sinful, and active advertisement of new “non-traditional” types of family disguised by the ideology of tolerance, as well as the spread of occultism.

In the educational sphere, we observe the destruction of the sovereign system of education: a rejection of traditional approaches towards education and upbringing; the development of education into a branch of economics, destined to serve only the interests of the global financial elite, into the service sector. In the European educational space, the Bologna Process has led to the dominance of the “competency” approach, which conceives of “competency” not as academic ability, but as a product to be manufactured to the demands of the client. This has resulted in a comprehensive decline in levels of mass education, chaos in educational structures, and the fragmentation of knowledge, the latter of which precludes the development of analytical and critical thinking in the younger generation.

In the sphere of international politics, the continued development of the hegemony of the United States of America poses a direct threat to the security of the modern world and order in it.

In addition to the above, an understanding of the worrying trend towards deliberate antitheism, and the necessity of supporting and safeguarding the traditional spiritual values of Christian Orthodox civilisation, is growing amongst the global scientific community.

The participants of the international conference thus urge:

The Hierarchs of the Orthodox Church:

- to develop and adopt a Declaration on Virtue, Freedom and Human Rights in Orthodox Christianity. Such a document is indispensable for a solid indication of the Orthodox Christian point of view on human virtue, freedom and rights, and additionally, for the protection of the rights of Christians to moral protest, critically assess situations and defend the collective rights of Orthodox peoples.

To Heads of State:

- considering the necessity of safeguarding Orthodox civilisation, to develop and strengthen in law a national idea, accepted by the majority of the population, and based on traditional values;

- to safeguard the idea of sovereign education, and reject the policies of allowing the sphere of education to depend on business interests, and the amalgamation of the educational sphere and the service sector, supported by the economic world.

To the Heads of Educational Ministries and Departments: