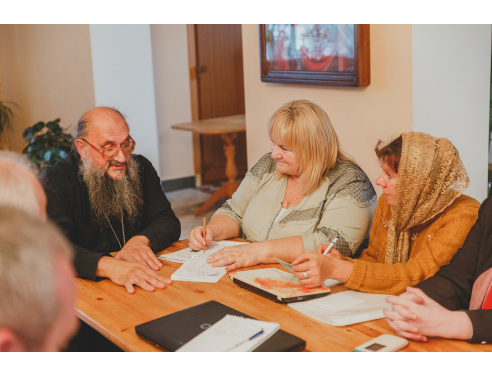 On October 25, 2015, in the hall of Otradnoye church complex, a meeting of Association of Christian Orthodox Scholars was held

On October 25, 2015, in the hall of Otradnoye church complex, a meeting of Association of Christian Orthodox Scholars was held. At about 50 participants took part in it. Apart from the representatives of Voronezh Higher School, Scholars from Lipetsk and Taganrog attended the meeting.

The meeting was opened by Archpriest Gennady Zaridze, who told the members of Association about  the 4th International Scientific Conference "The Orthodox Scholar in the Modern World", which took place in Thessaloniki, Greece, September 25-26, 2015. The second round of the conference will take place in Orel, November 12-13, 2015.

Then Dmitry Atyakshin, Doctor of Medical science, Associate Professor of Voronezh State Medical University named after N.N.Burdenko informed the members of Association about volunteer work and also about accepting applications  for a contest "Space through youth' eyes: for life on the Earth".

Alexandr Urchenko, Ph.D ( Psychology), an assistant of Orthodox Rural Dean of Taganrog, Rostov-on-Don eparchy notified the members of Association of a work on formal process of canonization of Saint Blessed Pavel of Taganrog. The representative of Taganrog indicated a great need for organizing the Historical- Cultural Expert Commission of fellows of Association of Christian Orthodox Scholars.

Valentina Vasilyevna Kryuchkova, a lecturer of a faculty of Romance and  Germanic Philology of Voronezh State University reported on the completion of translating and publishing a book of poetry written by Archpriest Gennady Zaridze in the Spanish language. Copies of this book, sent to Barcelona, are in great demand and also will be sent to other towns of Spain.

Other current events were discussed, new members of Association of Christian Orthodox Scholars were accepted.