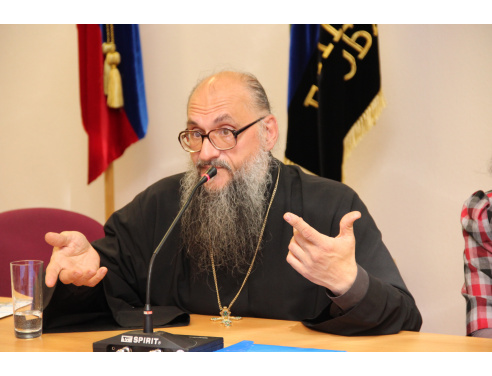 With  the blessing of Metropolitan Ioann of Belgorod and Stary Oscol, the most noted in the Black Soil Region, International Youth Forum” Moral imperatives in law, education, science, and culture” took place in Belgorod ,  May 13-14 ,2016. It was arranged  by Interregional Educational Public Organization “ Association of Orthodox Christian Scholars” with the support of leading Institutes and Universities of the town.

The idea of carrying out the forum appeared in 2012. In 2013, based in Belgorod National Research University, the first Youth Forum was held. The Forum united the Youth from different countries, who worried about the loss of moral benchmarks. In 2014 the Forum took place at State University of Arts and Culture of Belgorod, in 2015 at  Belgorod Law Institute Ministry of Internal Affairs of Russia named after I.D.Putilin.

In 2016 the IV International Forum was held at  Belgorod University of Cooperation, Economics and Law. Representatives from different Russian cities such as Belgorod, Vladimir, Voronezh, Elets, Kursk, Lipetsk, Moscow, Orel, Rostov, Ryazan ,Chelyabinsk , and also from different countries such as Ukraine, Poland, Angola, Congo, Ghana, Madagascar, Burgundy, Equador, Nigeria, Oman participated in the Forum. The members of it expressed their dissatisfaction with  weakening of Moral Imperatives in all spheres of life of the society. The main concerns over modernization of Russian Educational System and changing jurisprudence into the means of the legalization of Moral evil are constantly growing.

In the frames of the Forum the competition of students’ works under the theme “ Moral Imperatives in law, education, science, and culture” was organized. 263 authors took part in it. All of them are future teachers, doctors, engineers, lawyers, economists and many others. 10 works were given diplomas.