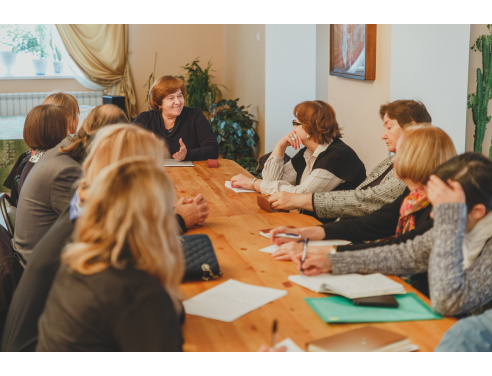 "On everyone's lips" or what might or need to be read nowadays (about Modern Russian prose) – a theme of the first humanitarian seminar within Interregional Association of Christian Orthodox Scholars, which was held in Otradnoye, October 25, 2015.

A humanitarian  seminar is a new form of educational work with the aim of introducing the members of Association of Christian Orthodox Scholars, the congregation of church, everyone interested in it to new tendencies and names of Contemporary Russian Literature , problems of functioning of the Russian Language, actual questions of History, Psychology and Pedagogy.  The first seminar was conducted by a vice-chairman of Association of Christian Orthodox Scholars , Professor Olga A. Berdnikova, Ph.D., Dr. habil. in Philology of Voronezh State University.

The participants had a good chance to familiarize themselves with Modern Russian prose, which continues traditions of the Russian Classics, to appreciate masterpieces of well-known writers such as Valentin Rasputin, Victor  Astafyev and Leonid Borodin in a new way. The authors raised the question of a highly personal spiritual search and penitence at the time, when they could have been sent to prison.

Among the writers of contemporary generation Olga A. Berdnikova mentioned the names of Sergey Shargunov, Roman Senchin, Zakhar Prilepin. Evgeny Vodolazkin's " Lavr" and Zakhar Prilepin's "Abode" have become the most popular novels in the recent years. 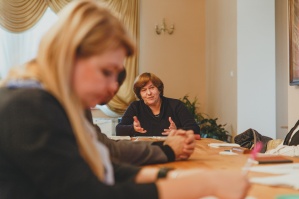 At the end of the meeting Olga  A. Berdnikova and the participants of the seminar came to the conclusion  that in the 21st century Russian writers carry on  some research on unpredictable character of the Russian man. An eternal question about how to live honestly in the world, where spirituality is not considered to be important - remains crucial in works of lots of representatives of Contemporary Russian Literature.

To sum up, the participants of the seminar intend to continue with such workshops. The theme of the next one is "Modern Russian Language as the home of the Being".