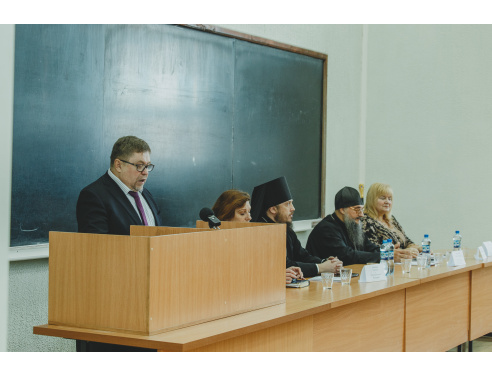 On the 12-14 of November, 2015 the IV International Conference “Orthodox scientist in the Modern World” (2nd round) took place in the cities of Orel and Bolkhov.

The theme of the conference was “Orthodox Traditions of the Russian People as a Spiritual and Ethical Foundation of National Education”. The conference was dedicated to the 200th anniversary of sainted Hierarch Theophan the Recluse (Vyshensky), a distinguished spiritual writer born in the region of Orel.

The conference was initiated by the Association of Orthodox Scientists, an interregional civic outreach organization and the Orel Metropolitan. The aim of the conference was to provide scientific and methodological premises for the development and practical introduction of a united system of spiritual and ethical education, based on the ethical law and spiritual traditions of the Russian people. Participants of the conference also explored ways and methods of maintaining the spiritual security of national education, in the context of the informational and ideological war being waged against Russia.

The objectives of the forum included: summarizing the volunteer activist’s experience of participating in the activities of good, charity and love; uniting the efforts of scientists to improve the ethical climate in the field of science; focusing on opposing destructive immoral tendencies in modern society, and other issues.

The conference was attended by scientists working in the fields of culture and education, as well as by government and community leaders from 26 cities of Russia, Belarus, Germany, Kazakhstan, Luhansk people's Republic, Poland, Serbia, Ukraine.

The literary-musical festival "The Sanctity and Light of the Earth of Orel" was held in the framework of the conference. The festival was dedicated to the 175th anniversary of the birthday of the outstanding Russian poet and native of the Orel region (the town of Bolkhov) Alexey Nikolaevich Apukhtin (1840 – 1893), in whose works Christian motifs play a significant role.

Choirs, children's music schools, singers and musicians from Orel were joined by poets from Bolkhov, Voronezh, Kurskand Berlin at the festival. In total over, 1200 people attended the plenary session of the conference, eight round tables, and offices of the three-concert festival in Orel and Bolkhov.